Well, gah. I’ve spent the whole day stirring up dust and packing things that the movers would probably be happy enough to pack for me. There are still a few last-minute things to take care of, like I can’t defrost the freezer until I finish up that ice cream, but that shouldn’t be too much of a challenge. I still feel jittery and restless, like there’s something I’ve forgotten, and I probably should rush around putting more things in bags and boxes, but the Eurovision Song Contest’s first semifinal starts in 12 minutes, so I’m going to watch that instead.

I’ll try to get some pictures of tomorrow’s chaos – not because I expect them to be particularly edifying for you, but because DrBob and I keep asking each other how we did this the last time and neither of us can remember. And it wasn’t even four years ago.

Song du jour of the day: Mama Said, by the Shirelles.

So there was the Final Saturday Stitch n’ Bitch and the Farewell Anna Dinner & Drinks and the Dyeing Party at Jantine’s and Jonna stopped by with a jar of appelstroop (yum) and I went to Fiona’s and sold my bike, so I guess that’s all the goodbyes out of the way. I am working very hard at not feeling sad about leaving, because I need to do useful things and not lie in a corner weeping, but the longer I maintain this fake-out, the more effort it requires. It’s sapping my concentration too, so I find myself staring into space a lot, that’s useful.

The shed’s cleaned out, so now we have a stack of tires in the living room. We’re classy like that. Also? Some power tools.

Tomorrow is the day to do the 10,000 things that I banished to the last minute – you know, can’t pack up the bathroom because we’re still using it, can’t box up the silverware, or the cat’s stuff, or defrost the fridge or clean up my desk because ditto. The local version of Goodwill is coming by tomorrow to take a bunch of stuff – I hope they take it, anyway. Egad, what if they decide it’s too smudged or something? Oh well, tomorrow is also garbage day, so I’ll just put it on the curb.

We’ve known this day was coming for a really long time. How did it manage to sneak up on us like this?

Song du jour of the day: A Change Is Gonna Come, by Sam Cooke.

Ever since mom died this has been kind of a downer of a holiday for me. I try to let it be redeemed by the fact that I’m a mother, and my boys are awesome, but now that they don’t actually live with me, that’s not really helping. Though it’s kind of better, because I don’t have to  pretend I’m not in a crappy mood. But also sucky because I’d like to post a picture of me & mom, or just mom, but I’ve packed all the pictures. Arg. Meh. Pthhtpt.

I did clean out the Shed of Doom today. That’s a good use of a bad mood.

Song du jour of the day: Just to See Her, by Smokey Robinson

A thing I will miss when we move

The Dutch call it “blauwe regen” – blue rain. Pretty, huh? It’s one of my favorite things about the house.

Yesterday the buyers came by with their little boy and a series of builder-people to look around the house, assess the damage and get quotes on what it would take to cure the house of 7 years (at least) of neglect. Wow, that’ll make you self-conscious. “Um, yeah, we were going to replace the roof, but we uh… got sidetracked?” Plus there was a lot of standing around waiting to be needed, to answer questions or translate (they don’t speak a lot of Dutch yet). And lots of awkward small-talk. It was unexpectedly exhausting.

But they’re super nice, the buyers, and the kid is adorable (also he said he likes me, which means I win the universe, so there), and they said they’d forward the mail and I introduced them to the next-door neighbors and we talked about the key handover and all. So that’s sorted.

Today I made a start on the shed. It’s not exactly airtight, so there’s some kind of plant life growing in there and everything is covered with dust and spiderwebs and what looks like bird poop but I don’t think there are birds in there, so… ew? So I got out the bucket and brushes and rags and rubber gloves and started hauling stuff out to clean off the accumulated gunk, and bam, it started to rain. So I was RIGHT to procrastinate! The Universe does not WANT me to clean out the shed!

But I have to, because I made an appointment with a kringloop (Goodwill, basically, for my North American readers) to come haul away stuff on Tuesday. I’m guessing I’ll find a lot of stuff to give away in there, because we almost never go in the shed (see above re spiders) so we’ve managed to live without whatever’s in there for four years. Therefore we probably don’t need it.

Sorry, blog posts without pictures are boring, I’ll get a photo of the Shed of Horror tomorrow and paste it in here. Unless I forget, heh.

ETA: the pictures don’t capture the full horror. Apparently my phone camera can’t perceive grime. But I know it’s there.

This was our sink. Now it belongs to the creepy shed-plant.

SO many things in here I’d rather not have to touch.

Song du jour of the day: What Becomes of the Broken-Hearted, by Jimmy Ruffin. This isn’t a topical choice, I’ve just always loved it.

Yesterday Fiona called me up and said hey wanna ride bikes and I said okay so we went out and it was beautiful and sunny and fabulous but not hugely eventful but still a really good day here are some pictures!

Then today I went to Amsterdam to pick up my passport and Mr. Husband came along to sort out some bank stuff and then we were going to go to the Rijksmuseum, yay! It’s been under renovation for ten years, and they’re very excited about the reopening – there was even a flashmob event in Breda, it was really cool! Here’s the video. And of course we want to see it before we leave and whoop! We’re running out of time.

Weird random irregularities at the consulate made me really jittery, but they gave me a passport in the end, so that’s okay, whew.

Some tulips in a park. I like the colors.

Meanwhile, Mr Husband was supposed to go to the bank, because Phone Guy said you have to go in person to figure out how to sell the house and then Mr Husband couldn’t find a branch of our bank in Amsterdam because his phone internet wasn’t working so he had to wait for me and then we went tromping all over the city, only to find one right near where we were before we started all the walking, and we told Teller Guy our story and he was all WTF, so he called Phone Guy and Phone Guy was all, oh, no, that’s all sorted, you didn’t have to come in at all. Argh.

And then we got sandwiches, and they were pretty good! When you go to the Rijksmuseum, you should definitely get lunch at this stand:

Don’t let the giant ice cream cone be your landmark, though. Everybody has those.

So that was good, but then it was 4:30 and guess what time the ticket desks at the Rijksmuseum close? Sigh. Well, when you do go, if you approach the museum from the Museumplein side, you might see these nifty things: 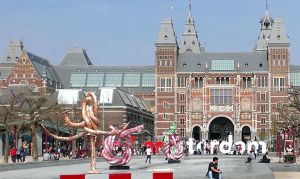 What are those made of, is that tinfoil?

Yes. It appears to be tinfoil.

So yeah, bummed about the museum, a bit. But at least I have a passport!

Um. I looked at lots of things with stripes! I had every intention of going to knitting for 2-3 hours and then buzzing by Fiona’s for a yarn consult – home by 3, plenty of daylight. But, er, well, a couple friends said (on Facebook) that they wouldn’t be at knitting because they were going to the Jean Paul Gaultier exhibit at the Kunsthal Rotterdam, and there was an extra ticket… and these women are three of my four personal fashion icons (every time I look at them, I think “why don’t I dress like that?”). They make great fashion icons because they’re actual people, right? I mean, we could all dress like Nicole Kidman, but none of us would look like her. But my friends look sort of… attainably fabulous, y’know? I could almost do that.

But I digress. I’m not actually a huge fan of haute couture, but I’ve lightened up since seeing some of Yves Saint-Laurent’s drawings at the Jardin Majorelle in January. If you think of it as art, rather than something to wear while you live your life, it’s a little easier not to scoff. And it’s really, really easy to see Gaultier’s stuff as art, because some of it is hella weird. There are a lot of really interesting juxtapositions, and I really enjoyed the exhibit.

The light wasn’t great for taking pictures, though. You know what else wasn’t great for taking pictures? You know those women who get to the top (or bottom) of the escalator and then STOP, causing a pileup of other passengers behind them and they don’t even notice? They do it getting on and off of trains too. Well those women were ALL at the exhibit today. Any time I backed up enough to get a good look at something, two or three women would appear and have an animated conversation about nothing. Or point at something, flinging an arm across my field of vision just as I touched the shutter button.

So I didn’t go to Fiona’s. And when I got home I spent like two hours editing and posting photos. And now I have ten days till the move, but still eleven rooms to organize. Uh-oh.

Song du jour of the day: Ég á Líf, by Eyþór Ingi Gunnlaugsson. Because how often do you see a guy gut a fish in a pop video?

Outside the train station

I really liked this series

Blue muscles on the body stocking!

This is real Eurovision history. I am the only person who is thrilled by this.

This was the only good shot I got in a whole room of cool handworky stuff.

Even the trees wear Gaultier. That’s not weird at all.

And Gaultier flagpoles. Because why not?

alala
Create a free website or blog at WordPress.com.