It’s a good thing you’re not here with me, because I’m totally turning into Janice Litman. 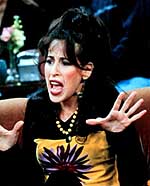 Nosedown in the Economist, the Guardian, cnn.com, and even CNN on TV, which I usually hate – hell, I hate it now. They went out to ask What The Taxpayer Is Thinking and then interviewed some idiot stockbroker who was all, “well we lost all this money so now the gummint should hurry up and give us more,” and the CNN-oids were all, “well, there you have it, Felicia.” Hello? Did we forget the assignment? Interview a taxpayer? Helloooooo?

But I digress. Numbers are down! They’re back up! The bill’s gonna pass! No wait, it isn’t! It is, but it won’t work. It didn’t! Numbers are way down! And with every new development I’m riveted. Via Slacktivist I found a This American Life feature on the housing meltdown, and they’re going to do another one on the current mess. And I can’t look away. This is way beyond train-wreck now, it’s more like a plane crashing into a passenger blimp and the fiery shards falling on a train, causing it to derail and plunge flaming into a stadium full of puppies and orphans.

For the record, I would like to state that I never thought unregulated capitalism was a good idea. But I never expected to be proven right in such a… flamboyant way.

Song du jour of the day: can only be It’s the End of the World as We Know It (and I Feel Fine) (because it’s all happening so fast I just can’t take it in) by R.E.M.

This entry was posted on Monday, September 29th, 2008 at 23:16 and posted in politiblog. You can follow any responses to this entry through the RSS 2.0 feed.
« not-quite-Friday, not-quite-market
parenting advice urgently sought »